We’ve been running the stock mufflers / exhaust system on this 996 ever since we tried the muffler bypass pipes. Those pipes were fine for the track but we just too loud for a daily driver.
So when the opportunity came along for us the grab a set of Fabspeed mufflers we took it.
Nice and throaty but definately not too loud when you are not on the gas hard.  The manufacturer claims 8-12hp.  We’re not sure about that, but the reduction in backpressure should help in some areas and they definately remove 12 lbs of weight from right were you want to get rid of it!  Oh, and they do sound sweet 🙂 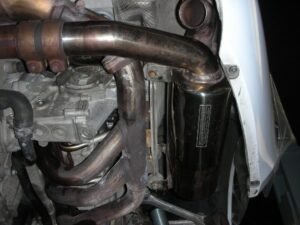 There are also headers available in the aftermarket for these cars. However the exhaust manifolds on the 996 are superior to those found on the 997 Carreras. They are similar if not dentical to the headers found on the 996 GT3 so changing out the headers (manifolds) is not required.
Here is a video from Fabspeed of their 996 muffler’s sound.
Installation of the mufflers on a 996 is extremely simple.  They are fastened by 2 bolts per side which fasten the muffler to a mounting bracket. Then there is a clamp on the crossover pipes.  That’s it.  Loosen the clamp, slide it out of the way toward the cat. After you remove the 2 bracket fasteners, the mufflers simply slide back and down out of their position within the rear bumper cover.  It’s easier without the tires in the way but can be done with the tires in place. A simple mod and definately worth it if you like the music of the Porsche flat 6.
Category: 996 Club SportBy bsulouffJanuary 31, 2009Leave a comment